The publications below are well-illustrated accounts of local research by staff, volunteers and associates. All proceeds support the Archive. Please send cheques, payable to “Slaidburn Archive”, to 25, Church St., Slaidburn, Clitheroe, Lancashire, BB7 3ER. Please contact the Archive for postal charges for multiple purchases. Thank-you for your support. 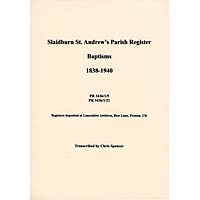 This is a transcription of St Andrew's baptism register of 1838 to 1940 held at Lancashire Archives, Preston (Refs. PR 3436/1/5 and PR 3436/1/21). The register records the date of baptism, the child's christian name, the name of the parent(s) and abode and by whom the ceremony was performed. Two indexes are provided: the parent's surname, and the town/village of abode. Proceeds from the sale will be shared between the Archive and St Andrew's. 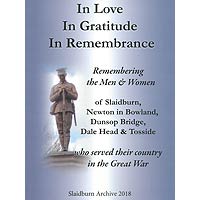 'In Love, In Gratitude, In Remembrance: Remembering the Men & Women of Slaidburn, Newton in Bowland, Dunsop Bridge, Dale Head & Tosside Who Served their Country in the Great War', by Margaret Brenchley. £16 plus £3.50 p&p.

From archival documents, family stories, various wartime records, magazines and newspapers of that time, the book is a detailed account of some of the realities of the war years, from the mundane to the tragic, through letters and photos of the participants sent between home and the trenches. The book is unusual in that the research highlights individual stories of those who served at the Western Front and returned home, named on memorials throughout Craven, alongside The Fallen. The inscription on Slaidburn’s cenotaph inspired the title of the book. 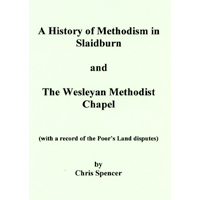 A History of Methodism in Slaidburn and the Wesleyan Methodist Chapel by Chris Spencer. £10 plus £1.50 p&p. Seventy-six printed sides in a slide binder.

This history is a record of Wesleyan Methodism in Slaidburn over roughly two centuries. It chronicles the efforts that people made over the years to the community, improving its lot through hard work and determination. This was a village with a very close-knit, caring and sharing population.

The book also incudes a record of the Poor's Land disputes. 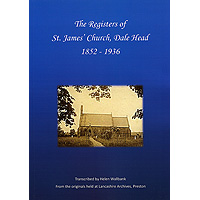 St. James' Church was built and consecrated in 1852. Initially only baptisms and burials could take place but in 1871 Dale Head became a parish in its own right and marriages were also performed. The construction of Stocks Reservoir required the transfer of interments to a nearby site in 1927, the closure of the church in 1936 and the construction on the new burial site of a new church, consecrated in 1938. This booklet is a transcription of the baptisms, banns of marriages, marriages and burials over the period 1852 to 1936. 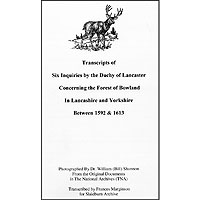 Transcripts of Six Inquiries by the Duchy of Lancaster Concerning the Forest of Bowland in Lancashire and Yorkshire Between 1592 & 1613 by Frances Marginson, from the manuscripts in the National Archives photographed by Dr Bill Shannon. £8 plus £2 p&p.

Reports of statements by local commoners to provide evidence to the Duchy court investigating the killing of deer, forest and park boundaries, removal of timber to maintain properties etc. These are remarkable insights into the names, ages and lives of ordinary people in and near the forest. 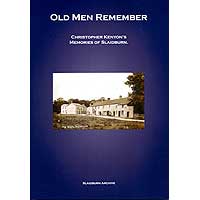 Christopher Kenyon spent his childhood in Slaidburn. His memories, recorded in his retirement, reveal life in the village between the Wars. This booklet presents his fond recollections of some of the village characters. 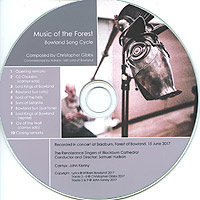 The Music of the Forest: Bowland Song Cycle CD commissioned by William Lord Bowland, composed by Christopher Gibbs. £10 plus £1.00 p&p.

The Music of the Forest, is a four-part song cycle and was commissioned by William, 16th Lord of Bowland in 2015. The work, by acclaimed Lakeland composer Christopher Gibbs, had its world premiere in Slaidburn on 15 June 2017. It was performed by the Renaissance Singers of Blackburn Cathedral under the baton of Samuel Hudson with guest instrumentalist John Kenny on the Deskford carnyx. 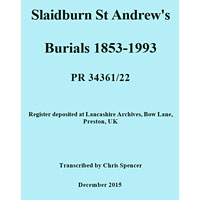 This is a transcription of St Andrew's burial register of 1853 to 1993 held at Lancashire Archives, Preston (Ref. PR 3436 1/22). The register records the date of burial, the name of the deceased, abode, age at death, and by whom the burial ceremony was performed. Two indexes are provided: the deceased's surname, and the town/village of abode. Proceeds from the sale will be shared between the Archive and St Andrew's. 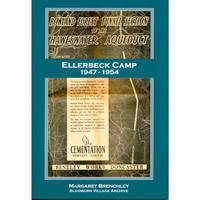 On Back Lane (the old road) between Slaidburn and Newton is Ellerbeck, the former location of a camp built to accommodate the workmen building the Haweswater Aqueduct between the Lakes and Manchester. The camp was built in 1948-9 and the 700 men at Ellerbeck worked on a 10 mile tunnel section across Bowland. This new book outlines the history of the camp, the living conditions for the men and their families, and the impact on Slaidburn. 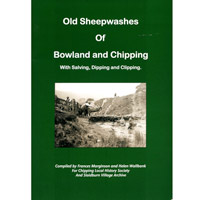 Old Sheepwashes of Bowland and Chipping With Salving, Dipping and Clipping by Frances Marginson and Helen Wallbank. £5 plus £1 p&p.

Salving and sheepwashing are farming practices long discontinued, but the remains of many sheepwashes are evident in the Bowland and Chipping areas. Sheepfolds and evidence of pooled areas formed by damming the streams are characteristic features of the old sheepwashes. We are fortunate that there are many photographs of the washes being used by teams of local farmers, and many of these are reproduced in the book. The results of a survey of surviving sheepwashes are presented, and the practices of salving and dipping described. 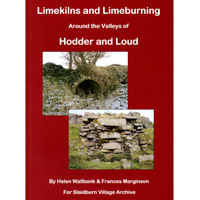 Limekilns and Limeburning Around the Valleys of Hodder and Loud by Helen Wallbank and Frances Marginson. £8 plus £2 p&p.

A comprehensive and authoritative survey of various types of historical lime-kilns in the Hodder and Loud valleys, enhanced by a description of the technical approaches to lime-burning, the labour involved in its processes, and the important impact on agricultural development. 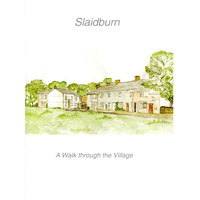 Slaidburn: A Walk Through the Village by Jenny Bradley. £3 plus £1 p&p.

A beautifully illustrated booklet outlining a walk through this historic village, with information on the landscape, Saint Andrew's church and the many historical, important buildings on the mapped route.

Sorry...but this booklet is now sold out. There are copies in the Archive for consultation.

Stocks. The Rediscovery of a Lost Hamlet: Survey and Excavation of St James' Church by Oxford Archaeology North et al. £3 plus £1 p&p.

Stocks in Bowland was a small hamlet largely drowned by the construction of Stocks Reservoir in 1932 by the Fylde Water Board. St James' church was above the floodline but was nevertheless demolished to ensure water quality. The church was rebuilt nearby, and the graves moved. This booklet describes the results of the excavation and survey of the old church by professional archaeologists and members of the local community. 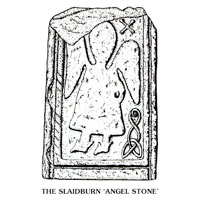 This example of early Christian art was found in the village and dates from the Viking period, c. 900. The boots on the Angel are unusual having tongues front and back. Please note that the stone is no longer kept at Slaidburn Archive.

It would not have been possible to publish some of the research of Archive staff and volunteers without the generous support of local organisations, private individuals and companies. We are grateful to the following for their interest and contributions.